All the Galaxy devices manufactured by Samsung have proved to be very successful. Whether it is Samsung Galaxy Tab or Samsung Galaxy S2, Samsung has managed to steal the show from the giants such as Apple and Nokia very easily. The Samsung Galaxy Player is Samsung’s attempt to kill the market of major portable music players like Apple iPod and Microsoft’s Zune. 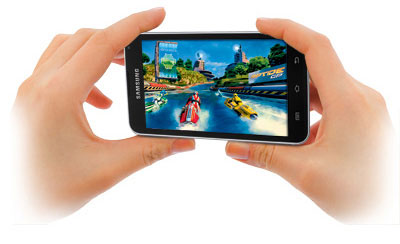 The display screen which makes use of the WVGA Super Clear LCD technology measures 5 inches and has a display resolution 800 x 480 pixels. Even though the Apple iPod has a smaller screen, it surely is the winner compared to the Galaxy Player because of its Retina display. The display is quite big and you will simply love watching movies on it. The image quality is fairly bright and clear. It supports a wide range of video formats including DivX, Xvid, MPEG-4 and AVI to name a few.

When it comes to listening to music on Galaxy Player 5.0, you will be amazed by the loudness of the sound output. The sound is very clear and it can easily fill up a medium sized room completely. On default settings, you can enjoy continuous music for 60 hours provided you turn off the display and keep the volume at 15. A feature that you won’t find on Apple iPod but available in Galaxy Player 5.0 is FM radio. The in-ear headset is quite good and you will love listening to music on it. It plays a wide range of audio formats.

The on-screen keyboard is good. This feature is not available in Apple iPod. You can also use Swype mode of typing for easily typing the text. Like Samsung Galaxy smartphones, even the Galaxy Player’s Android OS is laden with Samsung’s TouchWiz 3.0 UI. The Samsung Galaxy Player 5.0 offers plenty of other features like Wi-Fi, Bluetooth, and GPS. Since you get to connect to Android Market, you can download and install your favorite apps. The device runs on 1.5GHz dual-core processor and is also capable of delivering impressive 3D graphics performance. Lastly, the 2500mAh Li-Po battery gives you a battery life of 8 hours of video playback and 60 hours of audio playback.