LCD and LED are the two major display technologies that are widely used today. Liquid Crystal Display (LCD) has given way to Light Emitting Diode Display (LED). The main difference between the two is the backlights and other than that there is no major difference for the regular computer user. LED displays are relatively newer and come with hefty price tags compared to their LCD counterparts. If you want uninterrupted and high quality picture then paying a bit more won’t hurt you much and you can choose LED monitor over the LCD. But if you are looking to save on your electricity bill, then you might want to go for LCD.

Lighting of the monitors

For lighting up, old cathode lights are used in LCD displays whereas the backlight feature of LED is replaced by LEDs or light emitting diodes. In order to augment the video definition or the luminosity of your monitor screen LEDs are placed around the LCD panel or behind the LCD panel.

LED screens are better than the LCD screens due to the level of black and contrast. 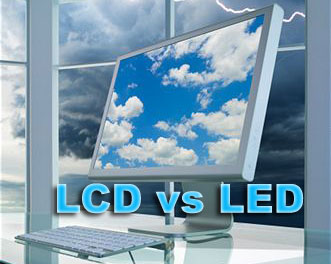 The main reason behind this is the inability of the liquid crystals in LED to prevent 100% backlight from backlight of cold cathode. Thus when black screen appears, you will not find it completely back; it will have some shades. But on the other hand, LED screens are able to project a black screen completely without any noise.

When viewing and LCD, the display is wider than 30 degrees when measured from the center, hence the image’s contrast ratio is diminished. But LED does not have any such problem as it has learnt from the mistakes of LCD and improvised on that.

The LED display, which has local dimming, consumes more power as compared to LCD display. So if you want to go for better picture then you will have to pay a little higher for your electricity bill.

RGB LEDs are considered to provide accurate colors in a better way compared to LCD displays. You will find LED monitors of different types like the Direct, RGB and Edge LEDs and apart from RGB LEDs, the other two displays use the white diodes to help the LCD panel illuminate which results in excellent picture quality.

Edge LEDs and RGB LEDs have slightly thinner monitor than the LCDs. The size is a point of difference amongst the two.

If you keep electricity consumption aside, LED displays are considered to be environment friendly as they do not encourage utilizing mercury for lighting.